The Singapore-flagged X-Press Pearl caught fire on May 20 en route to Colombo carrying 350,000 kilograms of oil in its tanks and at least 81 containers of “dangerous goods,” including nitric acid – a highly toxic chemical used to make fertilisers.

As the Sri Lankan navy and coast guard teams fought to douse the flames, the inferno tore through the ship’s cargo, releasing a cocktail of hazardous chemicals into the air and sea, prompting authorities to issue a toxic rain alert, and compounding fears of an oil spill.

The environmental impact was immediately clear.

And dozens of rare sea turtles washed up on Sri Lanka’s beaches, some with what appeared to be scorch marks on their shells.

Fish, dolphins and even a whale were found dead.

As of late June, about 200 carcasses had been counted.

Two months on, billions of plastic particles have washed up on nearly every shore of the island and are expected to disperse throughout the Indian Ocean.

Fishing communities have been heavily impacted, and locals fear it will be take years for the island to recover from what environmentalists have called the worst disaster in Sri Lanka’s history.

This excellent article looks in detail at the short and long terms impact of the incident. 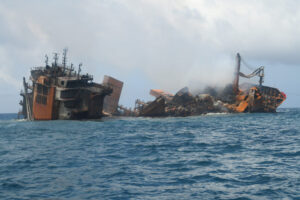