For over a year we have reported upon the hazardous condition of the fuel storage vessel FSO Safer which is moored off Yemen and is caught as a pawn between the Houthi rebels and the Yemeni government.

Before the war, the Yemeni state-run firm that owns the ship—the Safer Exploration & Production Operations Company, or Sepoc—spent some twenty million dollars a year taking care of the vessel. Now the company can afford to make only the most rudimentary emergency repairs. More than fifty people worked on the Safer before the war; seven remain.

The ship has more than a million barrels of oil on board. Stored in a hull that has had little maintenance in its 44-year life, on a ship whose pipes and valves are now receiving none, even the tanks holding the stored fuel are no longer being inerted as the equipment to do so no longer works.

FSO Safer is a ticking time bomb to an environmental disaster. A pawn in the negotiations between the Houthi rebels, the Yemeni Government and the UN who are desperate to get on board and ensure the vessel is safe

This excellent article in the New Yorker explains the issues  and the history of the Safer in detail – a fascinating but worrying read at: 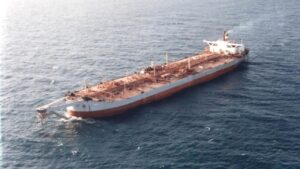