It is great that national and local government is engaged in this continuing pollution of their beaches, rivers, and estuaries by plastic nurdles being washed up onto their shores.

These nurdles are probably leaching out of containers lost from vessels at sea which have sunk to the seabed. They eventually break up and are slowly releasing the contents onto the Brittany shores. A container contains a billion nurdles most of which are buoyant so they will be carried ashore by wind and tides. Nurdles are the raw material in the production of plastic. In 2020 it was estimated that worldwide some 367 million tonnes of plastic were produced with this expected to double in the next 20 years. Through lack of governmental control on the use of plastic, poor cultural attitude toward its disposal, lack of interception systems on land and lack of biodegradable alternatives, the UN Environment programme in 2021 estimated that 19-23 million tonnes of plastic will enter aquatic systems annual from the land. 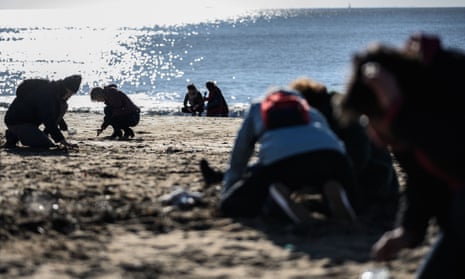 Unless our attitude to plastic changes expect to see more plastic nurdles wash up on our shore. Well-meaning, motivated people will attend beaches and clean up what they can see but it is a small proportion of what has been lost. The majority remains in the ocean leaching the chemicals (many of them toxic) from which they have been produced into the marine ecosystems disrupting their development and health affecting the whole marine ecosystem. The nurdles are being injected by marine mammals who think it is food. In some cases, larger mammals cannot ingest them and they pass through. For smaller mammals over ingestion of nurdles will kill them as they cannot pass through whilst preventing ingestion of food that it needs to live. Whilst the nurdles are in the stomach they release the toxic chemicals from which they were manufactured which are absorbed by the fish. If it is alive when caught we will each those chemicals!

The only way to stop this poisonous cycle is to stop the plastic from entering the seas and that must start at the source – stop manufacturing plastic and reduce our future need for it by purchasing alternatives!

In the meantime track down every polluter and make them pay the cost for their loss! However. proving where the nurdles came from is very difficult. For a legal case to be effective the evidence must trace the nurdle on the beach to the vessel that lost it and the batches of nurdles it was carrying. Without a source identifier, which the producers are most unlikely to agree to do, that is very difficult to do.

The UK and Ireland Spill Association has a very active Plastic Pollution Working group who are providing guidance through webinars and written papers on all aspects of plastic pollution available at: https://ukeirespill.org/plastic-pollution-working-group/

For more information on this incident: visit here.