The International Transport Workers Federation (ITF) and its affiliated seafarers’ unions have concerns about the treatment of the crew of the Wakashio by Mauritian authorities. Following the grounding of the  Wakashio, Captain Sunil Kumar Nandeshwar and Chief Officer Tilakaratna Subodha were arrested. In August 2020 they were charged with endangering safe navigation. They have been detained in prison since their arrest without bail. Most of the remainder of the crew have been detained under “house arrest” and kept in a local hotel, according to ITF, in what appears to be an effort to keep them on hand as witnesses in a future trial.

Some of these crewmembers – who are essentially held without charges – had already been on board Wakashio for more than 12 months due to the crew change crisis during COVID and have now been away from their families for over two years.

“The ITF supports thorough, independent investigations of the factors relating to any maritime incident, however, we are concerned about the lack of appropriate legal proceedings taking place regarding the Wakashio crew, access to justice and fair treatment by the authorities are fundamental human rights guaranteed by the Universal Declaration of Human Rights. We believe the treatment experienced by the crew of the Wakashio violates their human rights.”

The enquiry into the incident has been proceeding slowly in Port Louis and has so far highlight failing in the Coastguard for not doing more to intercept or contact the vessel; faults in managing the safe navigation of the vesee4l by the Captain and Chief Officer, failures in maintenance in the ballast pumps that could have moved water around the vessel after her grounding may have enabled her to refloat herself after grounding on the reef and also in the use of the correct scale charts on board which would have highlighted the approaches to shallow waters prior to hitting the reef.

Much more will emerge but holding the crew for so long seems harsh. 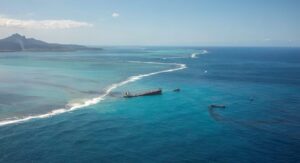