Members of the Intergovernmental Panel on Climate Change (IPCC), a body of scientists and others from 195 countries, will launch the first of four reports on Monday, which is expected to highlight the growing influence of methane in the warming of the atmosphere.

Methane is a key component of liquefied natural gas (LNG), the supposedly cleaner and more efficient transition fuel many in the shipping industry believe will provide a stepping-stone to zero-emission transport.

It is also being used increasingly as a replacement for land-based power generation as well as for powering large ships.

CMA CGM has ordered 14 LNG-powered vessels, some of which have already been delivered, and Matson, the US Jones Act operator, has also ordered similar ships. While The Loadstar reported in May that MSC agreed a long-term charter deal with Eastern Pacific Shipping for eleven 15,300 teu LNG dual-fuelled new build vessels.

In total there are more than 130 LNG-powered vessels under construction, including more than 40 containerships, according to the shipbroker Gibsons. 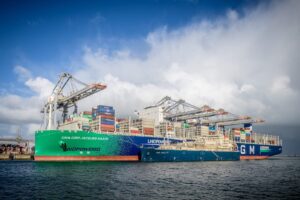