Adverse weather conditions have greatly disrupted the dismantling of what remains of the stern of the “MV Wakashio” on the Pointe-d’Esny’s reefs, in Mauritius.

The operation will resume at the earliest in September or, at worst, in October, local authorities announced after having ordered the tugs “Crest Mercury 3” and “Independence” to leave Tamarin Bay – where they were sheltering in the West – for Port-Louis’ harbour alongside “Hong Bang 6” and “Olympic Kapuas” barges.

The dismantling of the 75 meters of the stern had begun with the assistance of experts from the Chinese company Lianyungang Dali Underwater Engineering in October 20 and was due to be completed in March however the weather has been far from ideal. 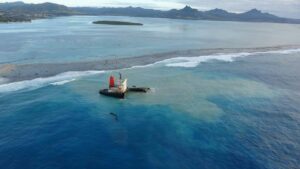