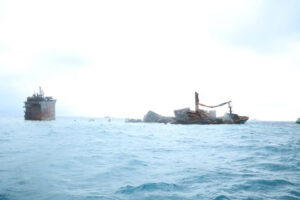 The X-Press Pearl departed Hazira, India on May 15 and was heading eastbound on the last leg of a voyage from the Middle East. Whilst sailing a fire started in one of its containers. She requested permission to return to India which was rejected. However Sri Lankan authorities agreed to respond to a distress call on 20 May as the vessel anchored 9.5nm outside the port of Colombo awaiting terminal space. She was carrying 1486 containers which included 25 tons of Nitric Acid as well as cosmetics and other potentially hazardous chemicals. . Whilst extensive fire fighting efforts were undertaken to contain the fire its eventually spread to the whole vessel. SMIT Salvage were appointed to manage the incident and once the fire was thought to be extinguished on several occasions it flared up eventually consuming the whole vessel.

With debris from the fire and its container’s contents washing onto Colombo’s pristine beaches on 23 May the Sri Lankan authorities demanded the vessel be towed further from the shore and into deeper waters. However, with the fire raging this was not possible. With the fires extinguished the salvage and port authority teams were able to get on board on 1 June and agreed that the two could start. However whilst undertaking a slow two on 2 June the water flooded vessel’s stern struck bottom and the tow was abandoned.

Since then, the rest of the vessel has started very slowly to sink. The vessel has appx 300 metric tons of bunker fuel on board and there are fears that as the vessel sinks and maybe starts to break up that this and other chemicals retained on board despite the fire will be released into the local waters. As such the Sri Lankan Navy and Coast Guard remain on the scene.

Speaking on CNA in Singapore, Shmuel Yoskovitz, the CEO of X-Press Feeders, the owners of the ship,

said he wanted to apologize for what has happened. “I’d like to express my deep regrets and apologies to the Sri Lankan people for the harm this incident has caused to the livelihood and to the environment of Sri Lanka,” said Yoskovitz.

Describing the current situation at the ship, he continued by saying, “Currently what the salvors are doing, they are monitoring the wreck and making sure that any debris or god forbid, the oil spill will be detected quickly and handled accordingly. To assess the real situation, we will need to wait for the wreck to settle on the seabed and then see what really can be done.”

Sri Lanka has also requested additional assistance from India to provide oil containment booms, dispersant chemicals, and tools to recover oil that might potentially leak for the ship. In addition, X-Press Feeders said that it brought in representatives of ITOPF and Oil Spill Response to monitor and assist with any clean-up if there is an oil leak.  X-Press Feeders said while limited by the current COVID restrictions it had also supplied heavy machinery to assist with the clean up along the shoreline.