The captain of the Japanese bulker Wakashio that grounded and later caused an environmental disaster in Mauritius was released and returned home to India 17 months after the accident and after 16 months in jail. The vessel’s second officer is also reported on route to his home in Sri Lanka after being released from jail, while the other crew members of the vessel have also been released from detention in Mauritius. The releases came as additional details were released from the court proceedings in which the two officers pleaded guilty to “endangering safe navigation.”

Captain Sunil Kumar Nandeshwar, age 58, returned to his family in Bhopal, a city in central India. Through the Maritime Union of India (MUI), he issued a statement thanking the MUI, High Commission of India in Port Louis, Shipping Ministry of India, and External Affairs Ministry of India for their support and contributing to his release from custody.

During a December court hearing in Mauritius, Captain Nandeshwar apologized to the people of the country for the accident while admitting he had been drinking alcohol at a birthday party aboard the vessel. He told the court on previous voyages he had approached within five nautical miles of Mauritius to obtain cellular signals and on July 25, 2020, approved the Wakashio changing course to seek signals from on shore. He said the crew was concerned about their families during the pandemic and he wanted to permit them to call home.

The captain also told the court that he had permitted the vessel’s lookout to leave the bridge to attend the birthday party. The captain said he did not intervene in the navigation because he had been drinking at the party. 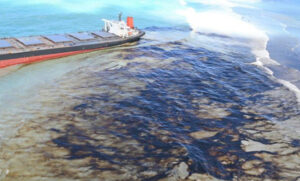